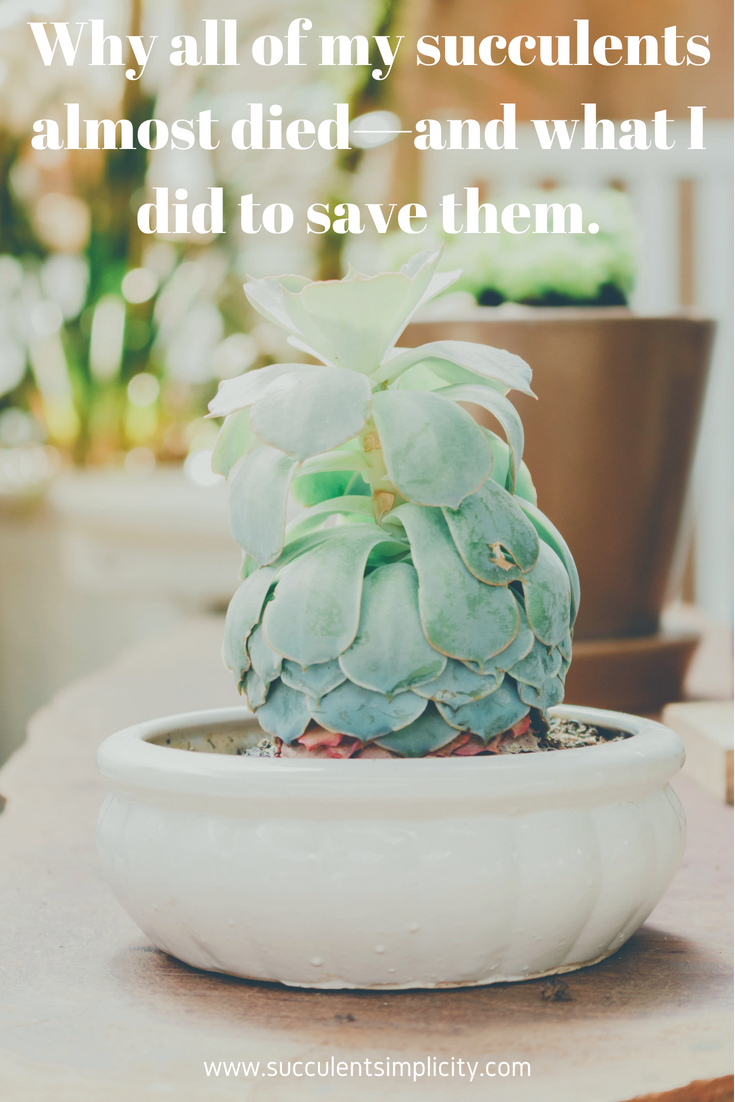 A little over a month ago nearly all of the succulents on my porch started showing signs of deterioration. It started with one pot at first—my most recently acquired echeveria. I watched in dismay as the problem spread to my other succulents over the course of the next two weeks. Leaves were falling off, and my previously fat little plants were shriveling up. After a thorough inspection, there were a few of the most common issues happening at the same time. Here’s why all of my succulents nearly died:

The main problem: Too much Water

I keep these plants out on my porch because it’s the only place in my apartment where they can get enough sunlight to keep them happy. It was hot and dry and sunny out, and I’d taken care of my succulents and watered them well, knowing that I wouldn’t need to water them again for at least a week or two—then, the weather turned. For the next two weeks there was nothing but thunderstorms and high humidity (typical, lovely summer weather for southeastern US). There was even a Tropical storm that had the rain blowing sideways. If I’d have been home, I’d probably have brought them inside that day—instead I got stuck on the side of the road, stalled out completely while driving on flash flooded street, but we’re not here to talk about that.

All of that moisture and humidity led to a combination of issues plaguing my succulents.

Upon close inspection I found these fuzzy little white trilobyte looking mo-fo’s hiding in my plants (they seem to especially love my elephant bush). These guys are mealybugs. They are attracted to soft plants, and the over-watered, mushy buffet they found was too good to pass up. I think they may have originally come from the newest plant, the one that started dying first, and spread to a few others—quarantining and observing new plants for a few weeks is a good way be sure this won’t happen to you.

Mealybugs latch on in the nooks of plants, where the leaf attaches to the stem, and suck out all of the delicious sap. They aren’t always white and fuzzy looking, so you might not even know you have them at first. That white stuff is a wax they build up as they mature and feast. The younger ones, sometimes called crawlers, are tiny yellow specs that you probably wouldn’t even notice. (Note that male mealybugs have wings, but don’t feed and don’t get waxy. They exist solely for reproduction.)

I also noticed some tiny webbing in a couple of plants that indicate that I may also have had spider mites.

Alcohol. I know some people like to say, “alcohol is never the answer,” but in this case it did the trick. I scoured the internet for how to deal with mealybugs, and found that the most popular suggestion was to use a q-tip with rubbing alcohol and gently dab them off. The alcohol dries them out, killing them almost instantly.

The q-tip trick might work if you notice you have one or two bugs on your plant, but I had a small infestation going. I just grabbed some 70% rubbing alcohol that I had around the house, and the sprayer from a little bottle that I use to mist my plants with water. I misted the infested plants—probably too generously—with alcohol, and repeated the misting again in two days. My elephant bush needed a third treatment before I stopped finding stray mealybugs. Adding alcohol before watering should also kill most eggs and prevent further infestation.

I saw that the mealybugs started returning, and because of the next set of problems, I knew I was going to have to take my gardening game a step further to get rid of any eggs or larvae that were in the soil…

The second and third problems I encountered: transparent-yellow leaves and root rot

Because of all that water, the leaves took on an unhealthy semi-transparent yellow color and began to wilt. This is the result of something called chlorosis, a deficiency in chlorophyll. The waterlogged roots aren’t able to take up enough nutrients for photosynthesis. I guess you could think of the roots as clogged pipes, or perhaps it’s analogous to trying to eat some healthy food, but you can’t because your mouth is stuffed with marshmallows.

Waterlogged roots don’t just affect leaves, the roots themselves start to die off, sometimes before you see any change in the leaves. The roots get infected with mold and fungus that can grow rapidly while eating the dying, decaying plant material in damp environments.

These two problem’s shouldn’t have been the result of just a little extra water. It usually takes prolonged exposure to moisture before plants deteriorate to this point, so I knew my soil wasn’t draining well.

For the poorly draining soil, and because of the resurgence of mealybugs, I knew I should get rid of the bad, egg-filled dirt. I wanted to replace it with something that had much better drainage. I decided to use the same potting medium as I had before (Miracle-Gro Cactus Palm and Citrus Potting Mix) but to improve drainage by adding pumice (a very light and porous volcanic rock formed when a gas-rich froth of glassy lava solidifies rapidly).

I uprooted everything (all of the affected plants). Along with the mealybug eggs and rotting roots, there was a lot of gross, slimy looking yellow fungus growing deeper in the soil. I’m pretty sure this was harmless mycelium, but its presence is a very clear indicator of soil holding too much moisture.

Initially, I had planned to let all of the plants air-dry for a few days. I hoped this would allow them to use up some of the excess water, and give the roots a chance to heal. The few days turned into a week, because I had a hard time finding pumice. I checked all of the local plant places, including big box stores, and nobody carried any pumice—eventually I got a 15 lb. bag on Amazon. Yeah that’s a lot of pumice, but it wasn’t very expensive and I won’t have to get more for quite a while. Since my succulents were spending extra time unpotted, I misted the roots with water every day or two (after the initial 3 days of drying), to keep them from drying up too much.

I used some of this 15lb. Bag Garden Pumice (Pumice, 1/8″ stone) mixed in with the soil to allow for better drainage. I used an almost 50/50 ratio of pumice to Miracle-Gro cactus mix.

Here’s a link to the pumice I used.
Disclaimer: As an Amazon Associate I earn from qualifying purchases.

I wanted to make sure that I wouldn’t immediately run into the same problems with eggs from nasty pests, or from soil fungus, so I also decided to sterilize the new soil before using it. You can read about that in my post about the process here: Sterilize Soil Before Potting—How and Why.

There isn’t really any good solution to saving a plant that is already dying from root-rot, or if there is I haven’t come across it yet, but if you act before it’s too late you can keep it from spreading and maybe save a good cutting from the dying plant. If you can feel the stem, find where the plant is still healthy and firm and cut there. For best results let cuttings dry for a couple of days, and if you have some, use a little rooting hormone on them before re-potting. Alternatively, if much of the plant has died, you can pick the healthy leaves and attempt to propagate them.

In the end, out of the dozen succulents on my porch, I only lost two to root-rot. The rest have made a full recovery and grown quite bit.